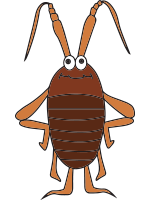 Cockroaches are abundant throughout the world and live in a wide range of environments, especially in the tropics and subtropics. Cockroaches can withstand extremely cold temperatures, allowing them to live in the Arctic. Some species are capable of surviving temperatures of −188 °F (−122 °C) by manufacturing an antifreeze made out of glycerol. In North America, 50 species separated into five families are found throughout the continent. Only about four widespread species are commonly regarded as pests.

Cockroaches occupy a wide range of habitats. Many live in leaf litter, among the stems of matted vegetation, in rotting wood, in holes in stumps, in cavities under bark, under log piles and among debris. Some live in arid regions and have developed mechanisms to survive without access to water sources. Others are aquatic, living near the surface of water bodies, including bromeliad phytotelmata, and diving to forage for food. Most of these respire by piercing the water surface with the tip of the abdomen which acts as a snorkel, but some carry a bubble of air under their thoracic shield when they submerge. Others live in the forest canopy where they may be one of the main types of invertebrate present. Here they may hide during the day in crevices, among dead leaves, in bird and insect nests or among epiphytes, emerging at night to feed.

There are some thirty species of cockroaches associated with humans. They feed on human and pet food and can leave an offensive odor. They can passively transport pathogenic microbes on their body surfaces. Cockroaches are linked with allergic reactions in humans. These allergens are also linked with asthma. About 60% of asthma patients are also sensitive to cockroach allergens. Cockroaches can live for a few days up to a month without food, so just because no cockroaches are visible in a home does not mean they are not there. Approximately 20-48% of homes with no visible sign of cockroaches have detectable cockroach allergens in dust.

Call Bug Away of Jacksonville, Florida today at 1-866-BUG-AWAY and let us take care of all of your pest control concerns!